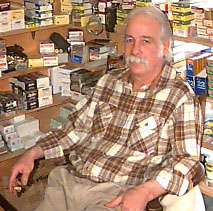 Meet The Commander
Lynn Van Huizen
Who is he? - Lynn owns a small gun shop near Muskegon, Michigan. He is 51 years old and is married. He was elected Commander of the Michigan Militia Corps "Wolverines" by the membership in July of 1995 after Norm Olson, the former commander, was removed from the position.

What is Lynn's history? - Lynn grew up on a farm in Allendale, Michigan. During the Viet Nam War, Lynn had a farmer's deferment, but he decided to give it up when he was 20 to be drafted. Lynn joined the 10th Cavalry Division, his job as a member of a quick response team was to search for downed helicopters and try to save the pilots and crew. Lynn spent 1 1/2 years in Viet Nam between 1967-69 and was given an Honorable Discharge with a Purple Heart.

After his discharge, he came back to Michigan and worked on a farm until September of 1978 when he developed "Stiff Man Syndrome," a rare neuro-muscular disease that incapcitates the effected individual. He was confined to a wheelchair until 1991. In 1991 the pain started to subside and he wanted to do something with his time, so he started his gun store - LJ Guns.

Lynn had been the head of a small group of politically-minded people in Muskegon county before the Michigan Militia Corps was created. After he had heard of the Corps, Lynn contacted the then-Commander to inquire as to how he could include his Muskegon group. Muskegon county was entered into the MMC and Lynn was elected Commander of that Brigade. Lynn began to actively help other surrounding counties in forming a militia. Eventually the membership grew so that the Michigan Militia Corps could be divided into Divisions. At first there were only 4 Divisions and Muskegon was part of the 3rd, and Lynn was elected the commander of that Division. As membership continued to grow, the need came up to further divide the state, so a total of 9 Divisions were created, Muskegon becoming part of the 5th Division, which now consists of 13 counties.

When Norm Olson was voted out of the MMC, a general election was held and Lynn was elected the new Commander. He continues to hold that position today.

What is Lynn's philosophy? - Lynn is not, nor was he ever, "anti-government" as many in the media, and those who make money off fear - such as Morris Dees, would like the populace to believe. Lynn maintains good connections with the local FBI to keep himself updated on their major activities, and to keep them informed of our goals and intentions. Lynn kept in near-constant contact with the FBI during the Freemen siege, assuring the FBI that we were not on our way. During the siege, Lynn expressed his concerns of the Federal government simply going in with excessive force, and the FBI contacts were similarly relieved that such action was not taken. He also maintains friendships with many in local and state law-enforcement, who often stop in the gun store and bid Lynn good day.

Lynn definitely believes that the pen is mightier than the sword. As it took a long time for the Federal government to get so large, it will take some time to return it to its Constitutional limits.

What does the Commander do? - The Commander of the Michigan Militia Corps is largely a coordinator of communications and activities of the MMC. No large amount of power comes with the position. He spends much of his time as Commander simply resolving conflicts between some of the Brigades and getting information disseminated.

Final thought - I asked Lynn for a final thought that he would like to go on his web page and he simply said: "Do unto others as you would like done unto you."